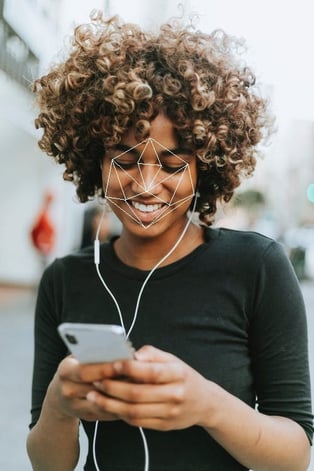 Facial coding automatically analyzes facial expression to understand emotional responses ‘in the moment’. It is considered one of the new and innovative techniques in MR. It quickly gained popularity among clients and researchers because it is easy to use and is relatively inexpensive (compared to neuroscience methods). It is seen by many as the new tool that can uncover the ‘true’ emotions of customers (e.g. see a relatively recent WSJ article The Technology that Unmasks Your Hidden Emotions).

The methodology has gained a lot of traction in certain MR spaces including ad testing, and when analyzing consumer behavior at retail fixtures.

At Bryter Lab we tested this relatively new method in two different sectors (Pharma and Technology) in both a qualitative and quantitative setting. We found that this approach has a number of limitations and often times just replicates findings gained by using other, more straightforward methods.

Sales aids are an important communication channel for pharmaceutical companies to promote their products to physicians. Unlike in the US, direct advertising of drugs is restricted in the UK, and sales aids are one of the key channels of communication used by pharmaceutical companies to communicate the benefits of their products to healthcare professionals. These documents work essentially like a brochure for a prescription drug, so it’s important that they are engaging and impactful. Market research is regularly carried out support the design process. 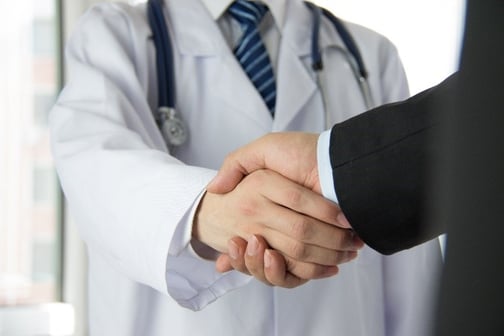 Testing them is challenging though. Physicians don’t express great enthusiasm or interest in reviewing what are essentially glorified brochures for drugs. It’s hard to gauge if they are genuinely interested or excited by what they’ve seen and keeping them interested and focused during the review process is not easy. We wanted to test if facial coding offered an opportunity to get behind the mask, and uncover the hidden emotions that might reveal an additional layer of insight about which parts of the sales aid were of genuine interest and grabbing their attention.

There are several challenges to testing sales aids in this way though. Presenting in a natural face to face setting (the way a sales rep would) raises the issue that we wouldn’t know what was evoking physicians emotions. People tend to smile back when they are smiled at. It doesn’t mean that they like the sales aid, they are just responding to a social cue.

Given the number of potential uncontrolled factors that could taint the findings, we needed to employ an approach that tested the materials in isolation, with no extraneous factors that could impact the participant’s emotional reactions. Rather than present the materials, physicians reviewed the sales aid on a laptop while their faces were analyzed by the facial coding software via a video camera.

The results that came back were disappointing. The facial coding data was predominantly flat, with neutral or ‘no emotion’ dominant throughout the process. The software had not been able to identify the ‘hidden’ emotions that we hoped it would.

In retrospect this is not hugely surprising. Sales aids present research data, statistics and information about drugs, and use fairly routine imagery and graphics to do so. Typically, none of these trigger particularly strong emotions. The learning here? Don’t use an emotional coding system like this to try and uncover hidden emotions. Instead use it to map reactions to more emotive content. More traditional interview methods combined with eye-tracking are still better approaches to adopt when testing sales aids.

Concept tests are a regular feature of qualitative research. The client in this case had developed a range of new tariffs and price structures prior to the launch of a new mobile service. The goal was to test consumer reactions to the structure and wording of these propositions, and uncover if there were any particularly strong emotional reactions, both positive and negative.

For this test we adopted an interview led approach and mapped the respondent’s reactions throughout the interview, paying particular attention to their reactions when being presented the different features of the propositions. 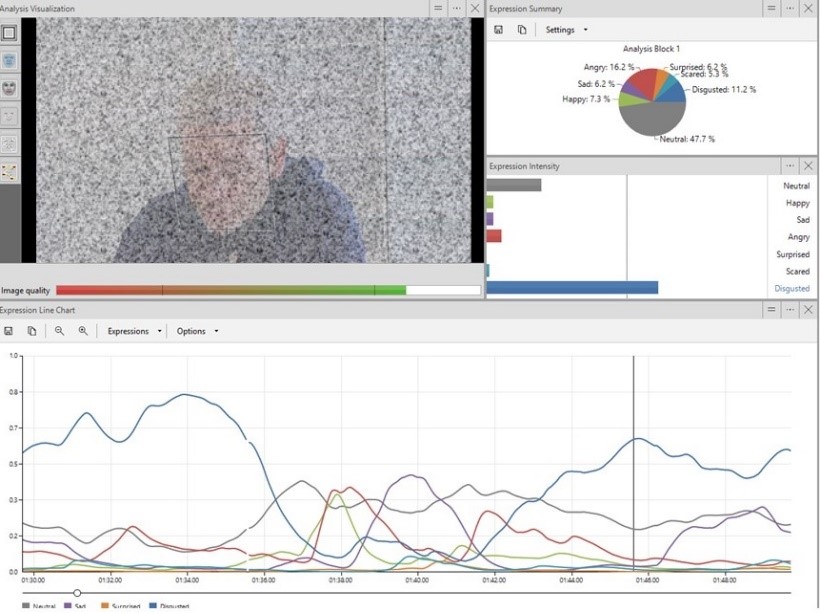 Again, the results that came back were disappointing. The software was able to identify the key moments in the interviews that elicited the most emotional responses, and these were consistent with the moderator’s notes. The problem was, it didn’t add much to the story. We also found that because of the unstructured and ever changing nature of qualitative interviews there were too many inconsistent factors across interviews (moderators, interview flows, structure of the interview, lengths of interview etc.) and this made it very difficult to pinpoint the exact reasons why Concept A was winning over Concept B. The learning here? It’s hard to incorporate facial coding into qualitative interviews. The system requires consistency and rigidity of approach, and this is at odds with the fluid nature of a good qualitative interview.

The strength of facial coding lies in quantifying emotions as opposed to uncovering hidden emotions. When applied in a structured and controlled set-up we can pinpoint what triggers emotions even when testing large groups of people. This may be useful information in ad and video testing, however more complex understanding of reactions, including what is most likely to influence purchase behavior requires a more holistic approach involving multiple methodologies. Recent evidence suggest that facial coding alone does not predict purchase behavior (see a recent GreenBook piece The Fallacies of Facial Exploring Prophecy Feelings vs Facial Coding). Human’s emotions and behavior are very complex, if we try to reduce them to 6-7 facial expressions, we will ultimately miss what customers truly think, feel and need.

Noemi Hahn is Head of Analytics at Bryter, get in touch to find out more about our innovative approaches to market research noemi.hahn@bryter-us.com

What a bankrupt restaurant can teach us about human needs

The Bryter office is based in Shoreditch. For those that have never been here, let’s just say that there are no shortage...

END_OF_DOCUMENT_TOKEN_TO_BE_REPLACED

Bryter are delighted to have been shortlisted for two awards at this year’s British Healthcare Business Intelligence Ass...

END_OF_DOCUMENT_TOKEN_TO_BE_REPLACED

Promotions and new hires in both our offices!

In recent weeks we've made a series of promotions in both London and New York, and also announced the arrival of a new g...