As the pandemic carries on keeping most of the world indoors, the gaming industry has continued to thrive during this period. With more free time than ever before, gaming has become a conduit for people to keep themselves engaged, entertained, and to escape. Major changes have been observed not only in the amount of time and money people invest in gaming, but also the way in which they game. Bryter’s PC Gamers in Lockdown report revealed that an increasing number of PC gamers have begun to adopt social and multiplayer gaming experiences, to fill the social void left behind by lockdown.

However, while PC gaming accounts for 23% of global gaming revenue, mobile gaming dominates the market, accounting for a whopping 48%. Therefore, in order to assess the impact of the pandemic on mobile gaming specifically, Bryter conducted a survey of more than 1,000 UK-based mobile gamers to better understand the changes in their social and spending gaming habits.

While previous research by Bryter revealed a significant increase in social gaming activities during lockdown, this study discovered that mobile gaming remains an anomaly in this arena with no significant increase in multiplayer activity. With a vast majority of 73% playing alone and a mere 7% playing multiplayer exclusively, mobile gaming continues to be a predominantly solo activity.

This is perhaps reflective of the varying motivations for gaming on different platforms, with a desire for mastery and achievement underpinning the popularity of mobile gaming, with social aspects remaining a lower priority for mobile gamers, unlike for those gaming on PC and console. 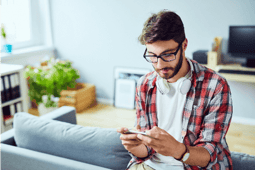 Although there have been little shift in the way mobile games are played, there have been noticeable changes in spending behaviours, with 23% of respondents admitting to spending more on in-app purchases than they did before the pandemic. However, this differs between age groups, with the maximum increase observed in 45-54 year olds, 1 of 3 of whom have reported spending more frequently during Covid-19. Conversely, a drop in in-app purchasing has been observed amongst 18-24 year olds, who were previously most likely to spend on in app purchases.

The results of this research leads us to pose an important question – can mobile gaming ever go from being a solitary activity to a social one, and how can mobile game developers evolve the mobile gaming experience to facilitate this transformation?