What doesn’t kill us… can still kill us

Medical advances, particularly in vaccines, may have thwarted many of the killers of the past, but they haven't completely disappeared. Seb Martin investigates.

2012-2013 saw an outbreak of measles in South Wales. There were over 1,000 suspected cases, with around half occurring in the Swansea area. 88 people were hospitalised, and one person died. The cost of treating the sick and controlling the outbreak was estimated to be around half a million pounds. Unfortunately, this isn’t an isolated incident. Recent reports from the World Health Organisation (WHO) state that more than 41,000 people were infected with measles in the first six months of 2018, resulting in 37 deaths.

How does this happen in this day and age? Didn’t we get rid of measles? Well, the answer to that is yes and no. Mass immunisation stops outbreaks like this occurring, but if people decide not to get their kids vaccinated then outbreaks can still occur. The MMR scare of the late 1990s / early 2000s is a major contributing factor in deciding not to get children vaccinated, but sitting behind these decisions is also a sense of confidence that ‘we don’t die of these things any more’. We’ve become so comfortable in the thought that we are safe, that we no longer feel we need to take the steps that made us safe in the first place.

With that in mind, let’s look the things that used to kill us a hundred years ago vs. those that kill us now. This chart, taken from the New England Journal of Medicine shows the top ten causes of death in the United States in 1900 and 2010: 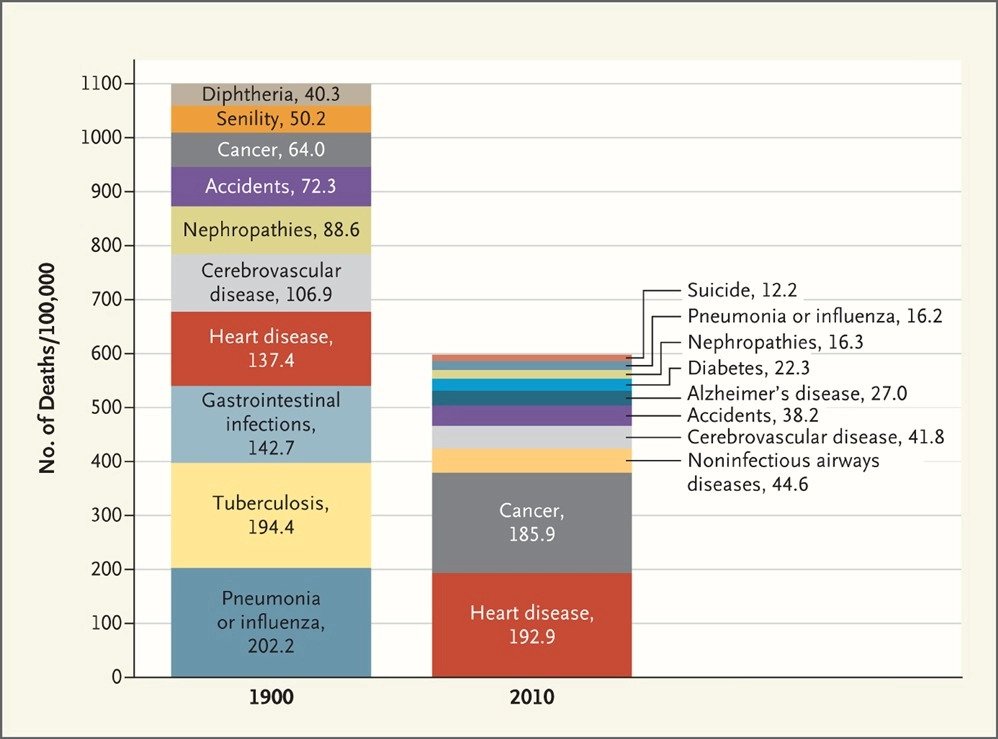 I for one am grateful of the opportunity to reach an old age and die of something that was less likely to kill me 100 years ago, and it’s an opportunity I’d like to pass down to my children as well, so I chose to get them vaccinated. This is, of course, a personal decision for each parent to make, but don’t assume that because we no longer see mass deaths from diseases like measles they have somehow magically disappeared. Advances in medicine did that.

Seb Martin is UK MD of Bryter, an international research and insight consultancy servicing sectors including healthcare and pharmaceuticals. For more info on how we support brands globally, contact Seb and the team on info@bryter-uk.com

The health and nutrition industry is constantly evolving, influenced by trends that emerge as a result of ever-changing ...

END_OF_DOCUMENT_TOKEN_TO_BE_REPLACED

At Bryter Labs, we are always experimenting with new techniques for market research. We’re passionate about providing th...

END_OF_DOCUMENT_TOKEN_TO_BE_REPLACED

The way we get the attention of doctors and consultants is changing. Bryter’s latest report, Digital Strategies for HCP ...