If you’re interested in kitchens or domestic appliances, then Euro Cucina in Milan is the place to be this week. All the big brands are here, showcasing their wares and the latest innovations in food technology.

There were a number of notable themes in terms of the kinds of products that were on display, and how brands were positioning themselves this year. Many of the usual brand promises were being made. For example, ‘We help you cook like a professional’, ‘We make life easier & simpler’, ‘We put you in control of the kitchen, we make the food taste better’ etc. 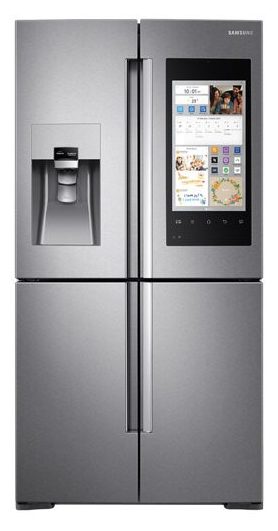 Where there was a noticeable increase though, was in smart and connected technology and the role it can play in the kitchen.

However, despite a lot of recent advances in this area it was clear that many brands still don’t really know what their play is here, what the use cases are, or how this is actually going to work in the future in a way that will really change consumers lives. In much the way that every company thought they needed an app 20 years ago, it’s like they feel they should do something, but they don’t really know why or what it should do.

Samsung, one of the early innovators in this area, were present for the first time at Euro Cucina this year signalling their intent to be taken seriously in domestic appliances. Key to their display was the Family Hub fridge.

This is a connected appliance that has already launched and enjoyed some success in the market, although comes with a hefty price tag. Its large screen on the front of the fridge connects via a handset and performs a number of different functions, including seeing inside the fridge without opening (thus maintaining its temperature), as well as showing when goods will expire by tapping on the good displayed on the screen. Internet connectivity means recipes can be brought up, and suggestions made based on what ingredients are in the fridge, and you can even play music through it, which is gimmicky but also quite fun.  Even with a big screen on the front, it’s actually a nice looking appliance, which is important for a large freestanding fridge, as consumers like these items to take centre stage in their kitchen. 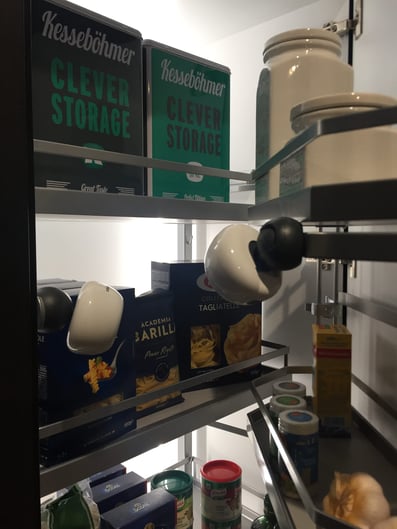 A consistent theme that ran across a number of different appliance manufacturers in relation to the fridge is that it allows the user to see what’s inside, will then make suggestions about what you can cook with it, and then order new ingredients to replace those that have been used.

In theory this all sounds great; it can help reduce waste, inspire you try new recipes, and help you be more efficient with the shopping by auto populating a shopping list when an item has been removed and used. However, it’s not quite there yet. The Smarter FridgeCam version of this promises a lot, only not right now. It can analyse what’s in the fridge, but it does this with a camera so large and clunky it takes up valuable space. It also looks like your dad popped round one Sunday and glued a go-pro inside your fridge as a fun DIY project.

Not only is it ugly, it’s not actually that smart yet. If it recognises you need ingredients for a recipe it can help you get them into your shopping list via the app, but that list doesn’t connect with an online grocery retailer yet, so really it’s just a smart version of pen and paper. Same goes for reordering. It’s really just a memo, not the smart time saving automated system you’d want it to be. The idea and the promise are there, but the execution and the tie in to the retailers isn’t. Until this happens, it’s unlikely that these technologies will actually change the way we shop. 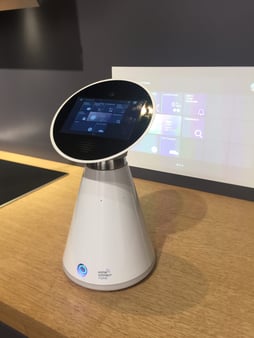 Continuing on the theme of ugly smart devices, the Mykie Home Connect hub is probably the winner in this category.

It too promises the ability to control appliances as well as pull up recipes, and also offers something called ‘virtual social cooking’.  Bizarrely though it has a projector in the back to transmit what is showing on the screen on a wall. I’m not sure if this is because the screen itself is so small as to be ineffective, or as seems to be the case with some smart tech we saw, they did it just because they could. Either way they may have thought a bit more about making the screen bigger and the weird base a bit smaller, because the overall effect is to have created something truly ugly that doesn’t actually work very well. Why would a consumer want this over a tablet that can also be taken around and out of the home?

Miele were showcasing their mobile app, which allows the user to monitor and control all the appliances in the home via one app. It too offers recipes and shopping functionality. Not only did it look pretty slick (and works on a regular phone or tablet), it seems like a pretty smart approach from the perspective of the seller. If a customer is going to upgrade their kitchen and fit new appliances, this gives them a good reason to brand match and fit all Miele appliances, that can then be monitored and controlled centrally. It’s not promising the world, but it’s a nice extra to justify brand matching across the entire range. What was interesting was that Miele, who had the biggest stand at the expo weren’t making a big thing of their connected home proposition. Time will tell if this is an area they fully commit to in the long term and look to make a centrepiece of their offering. 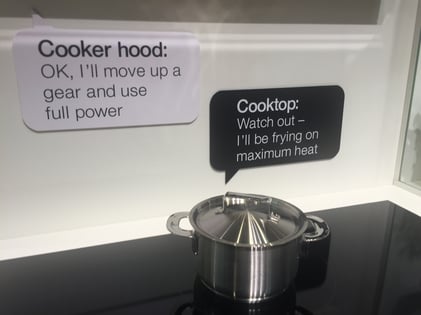 One area where Samsung, Miele plus a couple of other manufacturers have managed to get some smart appliance technology to work in harmony is  between the hob and the hood, with hoods able to sense what is happening on the hob and adjust accordingly.

Aside from this, much of what we saw still feels a way off from delivering real change in the way we live our lives, cook, and shop for groceries. The promise of change is there, but at the moment it feels like more effort than just opening the fridge, having a look inside and writing a shopping list. The role of the grocery retailers is going to be key. If they can make it easy for the fridge to order from them, and have it delivered without the user really having to think about it, then we’ll see real change. My money’s on Amazon for this one.

Grundig (remember them!), had what was one of the more unusual and interesting smart displays.

Rather than jumping on board the smart fridge, recipe app combo, they instead were showing off a cute worktop touch technology. A bit like AR, this allows the users to control small appliances, and the hob without any knobs, switches or dials thus creating a sleek, techy minimalist finish to the kitchen environment. Look up though and there is a whopping great unit that sits above projecting down on to the work surface, so whilst the controls are discreet, the technology itself isn’t, and it would only work in a large kitchen with an island where the tech could be installed. Still, it looked pretty cool, was definitely different from anything else we saw. You could see it appealing to those who want something that looks and feels modern in the kitchen. 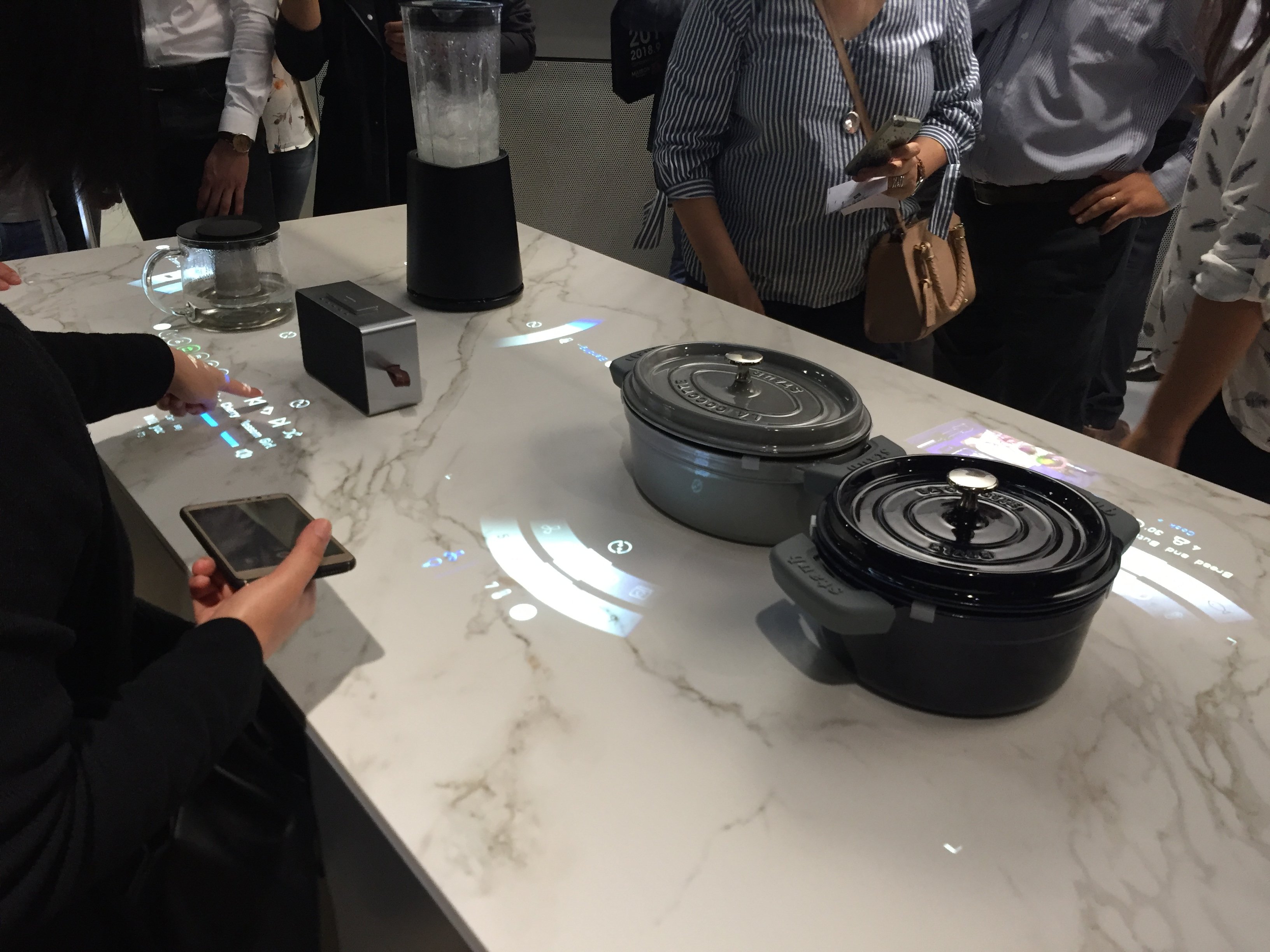 Other brands have made no attempt to show even the slightest interest in smart technology for their appliances.

Smeg have maintained a focus on quirky design and had one of the most colourful displays in the exhibition. They were showcasing their bright cookers and hoods, plus their collaboration designs with Dolce & Gabbana, which reminded me of those decorative plates from the 1970’s that British tourists would bring home from their travels and hang in the kitchen to remind them of their two weeks in Torremolinos.

Gaggenau on the other hand elected for a stand that felt more like an exclusive hotel bar, complete with Aston Martin parked outside and starched waiters floating silently around the crowd handing out glasses of mineral water. No attempt here for a fridge that will reorder the Bollinger when supplies run low, or AI to detect you will be entertaining your friends from Monaco that weekend. They are maintaining a course of making big, expensive, high end fridges that will look great in your big, expensive and high end home.

And this was a theme that was much more prominent throughout the expo. Well designed and good looking still seems to be more important than smart and connected, something appliance manufacturers would do well to bear in mind.  As well as making sure smart technology actual delivers real time saving and convenience benefits, consumers will still want it to look good. They are buying a kitchen first and foremost, a place to live in, socialise, spend time with the family and to show off to friends. They won’t want it filled with ugly tech, even if it can reorder the milk when it starts to run low

Seb Martin is UK MD at Bryter. To find out more, email him at seb.martin@bryter-uk.com