In the past two decades we have seen mobile phones become increasingly embedded into our everyday lives. They are so embedded into our lives that every day, we pick up our phones 56 times and spend 3 hours and 15 minutes on them (That’s 49 days a year!)

With such high interaction, the look and feel of our phones are important. So it’s not surprising that we have seen a variety of mobile form factors over the years. In the late 1990s and early 2000s, we saw an explosion of different form factors, ranging from clamshells, sliders, swivels, and a myriad of takes on the candy bar design. So prominent was form factor that some forms became synonymous with brands (think BlackBerry.)

However, the in the past decade, the rise of the touchscreen has seen a shift to a more standardised handset form factor.

Mass market phones were predominantly used for calling, texting, and taking (low quality) pictures. Limited capability meant that form factor was a way to appeal to consumers and drive differentiation between brands.

The emergence of the touchscreen has expanded our phone’s capabilities. We can now video call, watch videos, play graphic heavy games, and even make movies with mobile phones, which has resulted in a stronger emphasis placed on phone capabilities. Recent research by Bryter found that 72% of consumers say that phone features are much more important than the way a phone looks.

These new capabilities have also made screen real estate more valuable. From a consumer’s point of view, you want a hand-held device with the largest screen possible to watch videos and play games. From the perspective of service and app providers, having standardised screens and form factors make it more efficient to build user-friendly products. Imagine having to make different iterations of your app to accommodate for a clamshell, slider, and the standard touchscreen phone!

As long as demand for screen real estate and high app usage continue to be important to consumers, it will feel risky for phone manufacturers to move away from the thin, flat, screen maximising rectangles we’ve become accustomed to. However, our research shows that consumers are beginning to tire of this standardised form factor. 18% of consumers are bored of how smartphones look these days (rising to 30% amongst 18-24 year olds), and 30% would like a phone that looks different to what is currently available in market. This lack of differentiation is in turn making it harder for consumers to justify trading up the latest model, with 54% of our sample agreeing that they can’t justify the cost of the latest high-end smartphone compared to older models of the same phone. 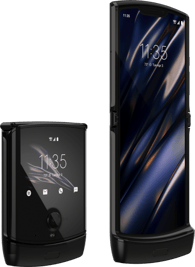 In response to this we are seeing some phone manufacturers create new premium smartphones with different form factors in an effort to reignite interest in what is becoming a somewhat tired category. In February 2019 Samsung announced the ‘Galaxy Fold’, capable of unfolding to expose a 7.3 inch display. Following closely behind, Huawei showcased their ‘Mate X’ foldable phone at the 2019 World Mobile Congress and Motorola have recently launched their new foldable ‘Motorola Razr’.

As with most new technology, these new form factors have not come without their issues. The Galaxy Fold had multiple issues surrounding screen peeling and breaking and consumers were hesitant about the hefty £1,900 price tag. However, Samsung’s second foldable smartphone, the Samsung Galaxy Z Flip, has seen some initial success with reports that Samsung are ramping up production after first batch of shipments across Korea and other countries have sold out.

While these new form factors have yet to gain momentum in mass market, we can see there is appetite for it. Our research shows that 36% of consumers would consider a flip or foldable phone in future. The challenge for handset manufacturers is going to be creating phones that drive genuine excitement by the way they look, but without compromising on all the features and usability that we have come to take for granted.

Bryter interviewed 1625 adult smartphone owners in France, UK, Germany and Italy. To download the dataset please fill in the form below.

Article by Anzie Huynh. To learn more about how Bryter helps technology companies better understand consumers and bring products to market get in touch at anzie.huynh@bryter-uk.com